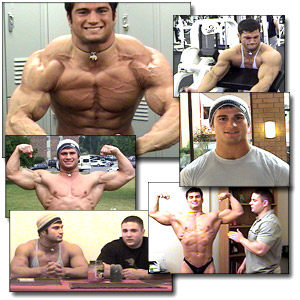 Can two teen national bodybuilding champions be wrong? Brett and Kraig Feldman, both of them national teenage bodybuilding champions, reveal their secrets in this video shot by the Feldmans themselves. Follow Kraig Feldman, as he is trained by his brother Brett Feldman, during the final 9 weeks leading up to his NPC Teen Nationals bodybuilding victory. Watch Kraig in hardcore gym training, having in-depth talks with his brother about what it's like to train for the championship and explaining his contest diet. You'll see Kraig arrive at the contest and feel his hope and expectations in the hours before he is awarded the national championship. Brett Feldman takes you and Kraig through a hardcore 9-week contest training regimen and describes what it takes to become a bodybuilding champion. Brett points out proper posing as Kraig hits his bodybuilding poses. Every 2 weeks during Kraig's training he reveals his complete diet, training routine, cardio and supplement programs. This video was shot by the Feldmans in their own gym training sessions and in discussions and posing sessions in their own home. Weeks of hard-core training were videotaped by the Feldmans with the best shots professionally edited into this video. This is the first time ever a teen bodybuilding champion's pre-contest regimen has been documented on video! • 1 hour 59 minutes